The monthly bond chart is forming a major top, but there will probably be a trading range over the next year.

The Forex market will probably rally for a few weeks soon. But it might have to test the October low 1st.

The Treasury bond futures formed an ii sell signal on the monthly chart in October. An inside bar is a bar with a low at or above the low of the prior bar and a high at or below the high of that bar. An ii (inside-inside) pattern is present when there are consecutive inside bars, like October and September.

When November traded below the October low, it triggered the monthly ii sell signal. But both bars in the ii had prominent tails. That means traders bought near the lows of those months.

That also means that the ii is a weaker topping pattern. November is consistent with this. It sold off early in the month to a couple points below the October low. But it then reversed up to above the October low.

Weak top usually needs to go sideways before down

This buy climax top is coming after an extremely strong rally in 2019. Strong bull trends do not typically instantly reverse into bear trends. They usually have to transition into a trading range first.

That is what is likely over the next several months and possibly all of 2020. Traders should expect the bond market to be mostly sideways for many bars.

I have been writing for several years about the nested wedge top on the monthly chart. Unless bonds break far above that top, that top should be the approximate end of the 30 year bull trend. This year went above the wedge top, but only briefly in August. The 2019 rally was a parabolic wedge buy climax. This reversal down is another attempt to end the 30 year bull trend

I have been saying that the transition into a 20 year bear trend might take many years. That process is still underway.

I also have said that the US will not allow negative interest rates. That will therefore put a cap on bond prices. Traders should not expect significantly higher bond prices from here.

While ultimately bonds will go much lower, they might continue sideways for a few years first. There is no sign of an imminent selloff. Traders will probably see a big trading range in 2020.

Second Leg Up Likely, But Might Test October Low 1st 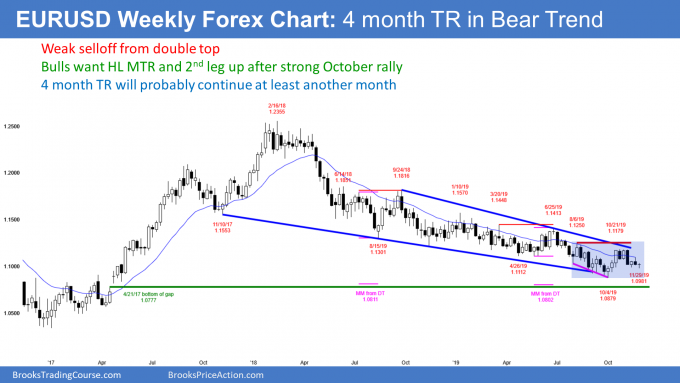 The EUR/USD weekly Forex chart reversed up from a nested wedge bottom in October. The 3 bar rally in October was the strongest rally on the weekly chart in almost 2 years. A strong rally usually has a second leg up, and so does a wedge bottom. Consequently, traders should expect the second leg sideways to up. The minimum goal is a test of the October high and the 13 month bear trend line. Both are around 1.12.

But from what level will the second leg up begin? No one knows. The bulls are hoping that next week will reverse up from the micro double bottom over the past 3 weeks. Last week was a doji bar and that is not a strong buy signal bar for next week. They will need a strong bull bar next week for a reliable entry bar. Otherwise, the EUR/USD might drift down to the October low over the next few weeks.

They know that every new low for 2 years quickly reversed up for several weeks. They expect that to happen again. That will not upset them as long as the chart continues to form lower highs and lows. They will then continue to sell 2 – 3 week rallies, expect a 200 pip profit on the fall to a new low.

There are magnets not too far below at around 1.08. Therefore the bear trend might not end until they are tested. The double tops in September 2018 and again in June 2019 both have measured move projections down to just above 1.08. Also, the gap above the April 21, 2017 high is a magnet and it is around that same 1.08 level.

If there is a strong break above the June lower high just above 1.14, traders will reevaluate what is going on. That rally would increase the chance that the bear trend had ended. The EUR/USD would then either be in a trading range or a bull trend.

How important is a new low?

Does it matter if there is a new low? Not really. Both the bulls and bears have been buying around the prior low for 2 years. The bulls buy for a 100 – 200 pip bounce and the bears take profits from their most recent sell from 200 – 300 pips higher.

Traders expect a second leg sideways to up after the October rally. If it comes from a higher low, the reversal up will be a higher low major trend reversal. It will probably only lead to a 2 – 3 week, 200 pip bounce, like every other reversal up from a new low.

If the rally comes from below the October low, traders would not see it as a second leg up. However, they would think of it as just another rally from a new low in the 2 year bear channel. They will trade the rally the same whether it comes from a lower or higher low.

Reversal at the first of the year?

Currencies sometimes have trend reversals around the 1st of the year. Since this selloff has lasted an unusually long time, traders expect a reversal up soon. 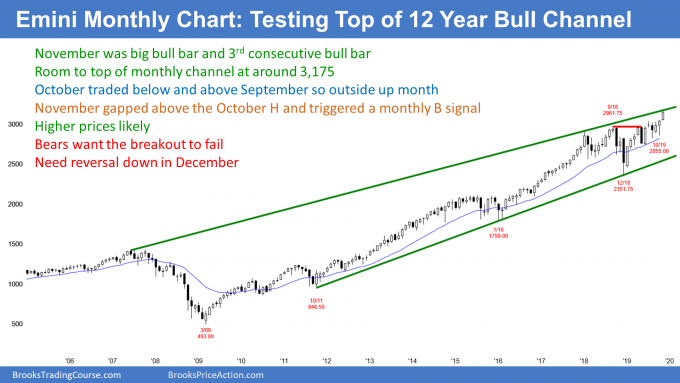 The monthly S&P500 Emini futures chart rallied strongly in November after gapping above the October high. Gaps are rare on the monthly chart. Small gaps and gaps late in bull trends typically close within 5 – 10 bars. Therefore, traders should expect a pullback to below the October high at some point within the next year.

However, the bull trend is strong. Furthermore, the top of the 12 year bull channel will be just above 3173 in December. That is a magnet above. The Emini is close enough so that it probably cannot escape the magnetic pull. Traders should expect the Emini to get there within a couple months and maybe this year.

It is important to understand that every bear trend since the Depression reversed up from a dip below a monthly bull trend line. A bull trend is is the bottom of a bull channel. The Emini is near the top of the bull channel. What will traders expect if the Emini goes above the top of the channel? They should expect a reversal down.

How far down? The goal is a test of the bottom of the bull channel. The bull trend line is now just below 2600.

Reversals at the top and bottom of channels usually come after overshoots. Therefore, a reversal down will probably only come after the Emini goes at least 20 – 50 points above the top of the monthly channel. It usually begins within 5 bars (here, months) of breaking above the channel.

Minimum goal for reversal down from top of bull channel

What about an island top?

If there is a gap down at any point, it would create an island top with the November gap up. I don’t ever remember seeing an island top on the monthly chart in my 33 years of trading.

Also, island tops and bottoms are typically minor reversal patterns. While the bears might get a few bars (months) down, they should not look at an island top and expect a bear trend. They eventually will get one, but the island top would not be the major force behind it.

Breakout Above Top Of Bull Channel, But Buy Climax 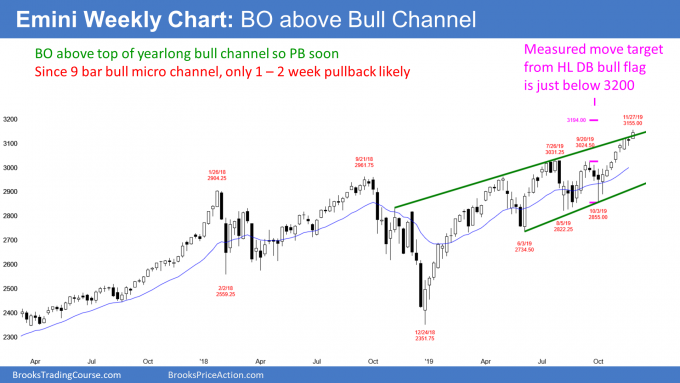 The weekly S&P500 Emini futures chart has not had a pullback in 9 weeks. A 9 week bull micro channel is a sign of strong bulls. They have been aggressively buying above the low of the prior week for 2 months. Traders should expect the bulls to buy at and below this week’s low if they get a chance.

However, a micro channel is unsustainable and therefore a buy climax. As the Emini gets further above the protective stop of the bulls (now, the October 3 low), the bulls at some point will need to reduce their risk. The easiest way is to take some profits. That profit taking will cause a pullback. But because other bulls are eager to buy the 1st pullback, it will probably only last a week or two.

Last week was the 1st bear bar in 7 weeks. It increases the chance of another bear bar within a few weeks. This week’s candlestick has a noticeable tail on top, which means traders sold into the end of the week. This is another sign of exhausted bulls. But because the bull trend is so strong, traders are not looking for more than a 1 – 2 week pullback at the moment.

Eventual evolution into a trading range

Once the Emini begins to form pullbacks, the bears will begin to sell the next new high. Also, the bulls will become quicker to take profits. Some will switch from buying above the high of the prior bar to buying pullbacks. Additionally, they might start to take profits at a new high.

If enough traders make this change, the strong bull trend will stop going up and begin to go sideways. If so, the bears will become more willing to short and the bulls will be more willing to greatly reduce their position size. This could result in a swing down for several weeks. But most traders will want either a double top or a micro double top before there will be more than a couple weeks down.

Buy Climax, But Room To Top Of Bull Channel

The daily S&P500 Emini futures chart has been in a Small Pullback Bull Trend for 2 months. How far up can this strong bull trend go over the next month? The top of the channel on the monthly chart is a possible target. 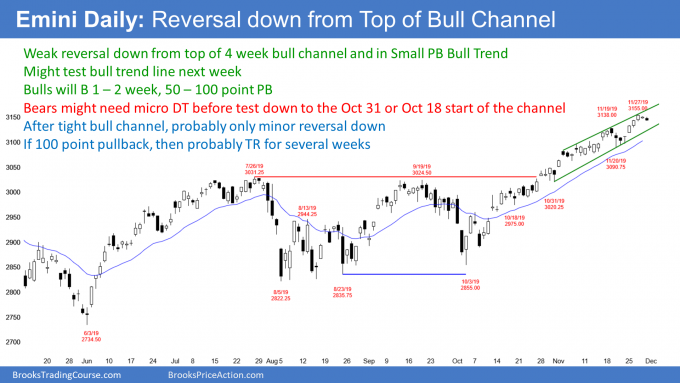 A tight bull channel does not typically instantly reverse into a bear trend. Traders know that most bear trends begin with some kind of double top. Consequently, the bulls will buy the reversal down, even if it is more than 100 points. The best the bears can probably get over the next month is a trading range and not a bear trend.

The Emini will probably have to go above all 3 before there is more than a 5% correction. Traders should therefore expect higher prices over the next couple months. This is true even if there is a 100 point correction first.

Markets like symmetry. They tend to repeat behavior, like in Leg 1 = Leg 2 measured moves. They sometimes create the exact opposite of what just happened. It is common to see a big bear bar after a big bull bar and vice versa.

Do you remember what happened last December? There was a huge sell climax and then a tremendous reversal up. This year is ending with a huge rally, which is the opposite of last year. That does not mean that the Emini will have a huge selloff and create the mirror image of last year. But it does slightly increase the odds. Consequently, if a strong reversal down begins, the bulls should make sure that there is a credible buy signal before buying.