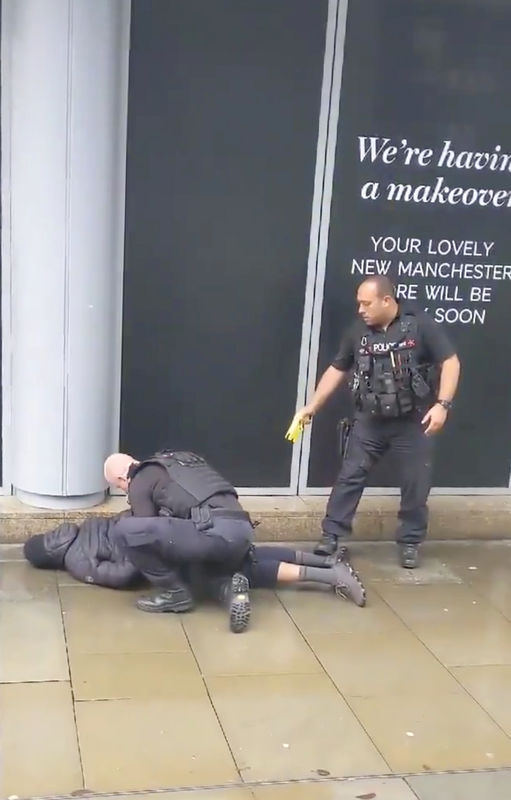 © Reuters. A police officer points a taser while the other holds a man down outside Arndale shopping center, where several people have been stabbed, in Manchester

MANCHESTER, England (Reuters) – Five people were stabbed at a shopping center in the northern English city of Manchester on Friday and police said counter-terrorism detectives were leading the investigation.

The stabbings took place at the Arndale shopping center in the heart of the city. The mall was evacuated as armed police rushed to the scene.

“We can confirm that five people have been stabbed and taken to hospital,” Greater Manchester Police said in a statement.

“In these early stages we are keeping an open mind about the motivation of this terrible incident and the circumstances as we know them.

“Given the location of the incident and its nature, officers from Counter Terrorism Police North West are leading the investigation as we determine the circumstances.”

They said a man in his 40s had been arrested at the scene on suspicion of serious assault. Pictures posted on social media showed officers using a stun gun on one man.

Prime Minister Boris Johnson said on Twitter: “Shocked by the incident in Manchester and my thoughts are with the injured and all those affected.”

The city was the location for Britain’s most deadly militant attack in recent years when a suicide bomber killed 22 people in May 2017 at the end of a pop concert by Ariana Grande at the Manchester Arena, not far from the Arndale center.